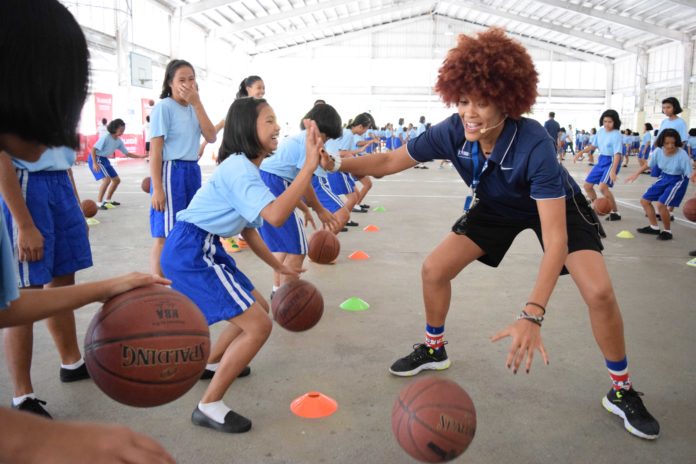 Jr. NBA Philippines presented by Alaska staged its first open clinic for 2019 at the Sisters of Mary Boystown and Girlstown in Silang, Cavite on Feb. 23-24, teaching over three thousand boys and girls the fundamentals of basketball and Jr. NBA core values.

As part of the league’s efforts to promote inclusion, Jr. NBA Philippines provided opportunities for young girls of Sisters of Mary Girlstown from Grades 7-10 to participate in basketball drills and skills development exercises on Feb. 23, with a total of 2,248 female athletes experiencing world class basketball instruction from Jr. NBA Coaches Natalia Dos Santos and Jeffrey Cariaso with the Alaska coaches. On Feb. 24, the Jr. NBA Philippines program hosted 1,060 kids that learned the fundamentals of shooting, passing, dribbling, defending and conditioning, while Alaska and Gatorade facilitated nutrition and hydration talks respectively.

“Jr. NBA Philippines presented by Alaska distinguishes itself by reinforcing an active lifestyle and instilling positive values for kids while enjoying the game of basketball,” said Dos Santos. “Through the Jr. NBA program, we empower children from varying backgrounds and help them fulfill their potential as young players and future leaders of society.”

In addition to the open clinic, Jr. NBA Philippines will stage Regional Selection Camps in Lucena (March 9-10), Baguio (March 23-24), Dumaguete (March 30-31), Butuan (April 13-14), and Metro Manila (April 26-27) to advance the top 40 boys and 40 girls in the National Training Camp on May 17-19. As many as five boys and five girls from the National Training Camp will advance to the first Jr. NBA Global Championship Asia Pacific Qualifiers, a week-long selection camp in June featuring top youth players from Australia, Indonesia, Malaysia, Philippines, Thailand and Vietnam.

As a culminating event, the top performing 10 boys and 10 girls will represent Asia Pacific in the second Jr. NBA Global Championship held Aug. 6-11 at the ESPN Wide World of Sports Complex at Walt Disney World near Orlando, Florida.

The NBA is a global sports and media business built around four professional sports leagues: the National Basketball Association, the Women’s National Basketball Association, the NBA G League and the NBA 2K League. The NBA has established a major international presence with games and programming in 215 countries and territories in 50 languages, and merchandise for sale in more than 100,000 stores in 100 countries on six continents. NBA rosters at the start of the 2018-19 season featured 108 international players from 42 countries and territories. NBA Digital’s assets include NBA TV, NBA.com, the NBA App and NBA League Pass. The NBA has created one of the largest social media communities in the world, with 1.5 billion likes and followers globally across all league, team, and player platforms. Through NBA Cares, the league addresses important social issues by working with internationally recognized youth-serving organizations that support education, youth and family development, and health-related causes.

Given the growing issues on health as well as the fast-changing technological environment, which leads to the change in children’s interests and behavior or sedentary lifestyle, Alaska believes that there is a need to reinforce its thrust in leading a healthy lifestyle not just by drinking milk but also by leading an active lifestyle. Alaska seeks to engage the youth, especially younger kids, in sports.

Alaska Milk looks beyond selling milk – it sells nutrition and by doing so, the Company and brand Alaska is doing its part in nation-building. Through youth sports development programs, Alaska is able to help nourish children for them to develop into champions in the field of interest and, in general, in life. The overall objective of the Alaska Sports is to strengthen the brand’s equity in nutrition through sports. To portray Alaska Fortified as a brand that helps instill the values of determination, discipline, teamwork, and hard work among the youth through sports.