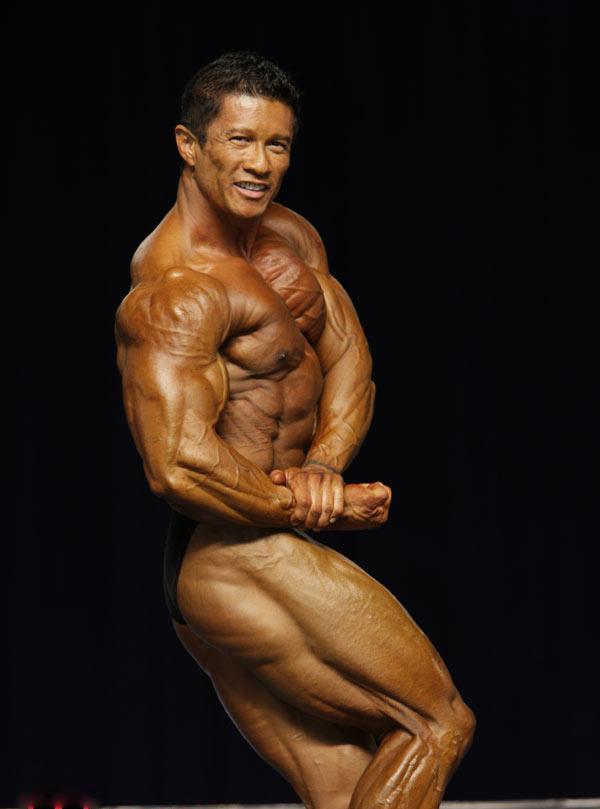 Jesse Sabater was born in Baguio City Philippines. He came to the US in 1991 and has been bodybuilding for 23yrs. He started competing since 1989, under the guidance of Sammy Ayochok.

He will be competing again in July 2010 for the Mr. USA in Las Vegas and the Nationals in Dallas. Jesse has two brothers who are bodybuilders and one sister, Karina Lagman, who owns Fitness Edge in Baguio. My brother Roy Sabater also owns a Max Muscle franchise in Los Alamitos, CA. Jesse is a dental technician by trade and owns Dental Arts Lab in Ventura CA.

Jesse is sponsored by SAN supplements, which supply him with all the supplements he needs. “I love bodybuilding” because of the discipline, the persistence to endure pain, dieting, and seeing my body change dramatically when competing.

I work out 4 to 5 times a week and I always try to eat clean with quality carbs and protein. Bodybuilding is a lifestyle, you have to breathe, eat and sleep bodybuilding if you want to be successful. In the future, I would like to promote shows and help young adults to work out and prep for competitions.

help young athletes the proper and scientific way of training, diet and supplementation

23 years ago, I weighed around 125 to 130 lbs. I went into bodybuilding to mainly impress the girls! And it became an obsession. I worked out every single day and I learned later on that more is not better when it comes to building muscles. Muscles grow when your resting and “overtraining” is the worst mistake that people do.

That is why someday he wishes to help young athletes with proper and scientific way of training, diet, and supplementation. Jesse recently went home and saw that a lot more Filipinos are into fitness now. It was surprising to see that the gyms are packed even during the holiday season. People should organize and promote more physique contests, not only Bodybuilding but Figure and Fitness, even Teenage class as well. That way even the ladies and the younger generation get motivated to work out.

In closing, I would like to thank those people that helped me to keep pursuing my dream to become the first Philippine-born bodybuilder to be an IFBB Pro! Thanks to Sammy for showing me the way!

To my friends Alfie Coronell, Bill Vickery, and Allan Watari for the support and motivation to push harder! To my brother Roy who I look up to, my sister, and my parents. I would especially want to thank my wife Salfree for being there for me, cooking all my diet food and being so ever patient with me, despite her busy schedule as a nurse and mother to my kids. I wouldn’t be where I’m at if she wasn’t there for me.

I am available for consulting; you can email me at [email protected]