Mike Matarazzo’s second chance: wisdom for those who have a first chance. On December 8, 2004, Mike Matarazzo, at the tender age of 38, gained newfound wisdom, primarily because he realized he was alive after having undergone triple-bypass heart surgery.

It’s beyond our power to imagine the emotional devastation from that event, just as it’s beyond our power to express our gratitude that this lovable bodybuilding immortal is with us still. Less than three weeks after his surgery, FLEX spoke with a recuperating Matarazzo [“Facing the Future,” March 2005]. Three months later, we spoke with him again, for a closer perspective on–well, his life.

MIKE MATARAZZO: I had a couple of setbacks. At one point, I had some fluid in my lungs, and I still feel really drained. Other than that [as of early April], I’m driving again, I walk three or four miles a day on a treadmill, I’m hitting a bag, and I’m just barely starting to lift weights, very light, super-high repetitions.

My surgeon told me it would take at least a year before I’m back to 100%. For now, I’m very limited, and I don’t need a doctor to tell me that. I feel extreme soreness and pain in my chest and shoulders, and I still hear my chest cracking, so I have to be careful. I get aggravated on a daily basis, because I want to do more, but I’m also aware that I have a problem, so mentally it plays a lot of games on me. 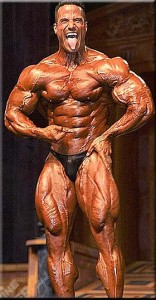 That’s the biggest thing. I never before thought about death or even injuries. I always thought I would age gracefully, like everyone else in my family, and I thought my bodybuilding lifestyle would allow me to be healthy and active for an incredibly long time.

This whole thing–it makes you doubt yourself, and I’m a pessimist as it is. I tend to dwell on the bad. I went to see my surgeon in the middle of March and I asked him, point-blank, “Doc, do I have to continue seeing a doctor for the rest of my life, or can I just take my chances and get on with my life, the way it was?” 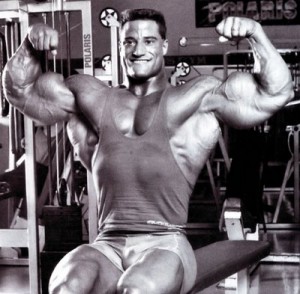 You’ll have to have an echocardiogram once a year for the rest of your life.” These are things that, before, were totally alien to me. That alone has really depressed me. I now feel as if I’m on a leash. I have to check in with someone regularly to make sure that everything I always thought was OK might now need some maintenance.

Mike Matarazzo’s second chance: wisdom for those who have a first chance. Shouldn’t everyone take that precaution?

Sure, and I did. I’d get a clean bill of health, and the doctors would joke, “What are you doing here?” But these things sneak up on you. I used to believe that I was 100% healthy, but those days are gone, and I’m angry, because I did it to myself.

Oh, god, where do I begin? I’d have to say that everything that led to my heart problem began the minute I started getting serious about competitive bodybuilding. In order to get bigger, I’d eat five, six, seven pounds of red meat a day, no vegetables. And I’d stay away from fruits because of their sugar.

Worst were the chemicals. I have so many memories of being alone in a hotel room the week, five days or two days before a contest, and doing unspeakable things to my body–steroids, growth hormones, diuretics–anything and everything that we as bodybuilders do to achieve a certain look. The greatest danger, though, is that, while dieting and training stay the same through the years, there’s a compulsion to experiment more wildly with chemicals.

Every day, guys are on the phone asking who’s using what, where are they getting it, how are they mixing it? There are guys out there who are being paid big money by pros to mix special concoctions for them. I remember being all over the world, a few nights before a contest, putting chemicals into my body, knowing I was hurting myself, but I did whatever it took to attain a “look.”

If I could go back in time, those things never would have happened. I would have gone back to driving a truck. I have no doubt in my mind that the primary cause of my problem–the biggest thing–was the chemicals. It was the steroids, the growth hormones, the diuretics. We take Cytomel to lose fat, knowing it’s an incredibly powerful thyroid drug, and that’s only one of the many, many drugs out there taken by everyone, from amateurs to the highest level in the world.

I wouldn’t in a million years change a lot of the aspects about bodybuilding, but that’s the one aspect I’d discontinue if I had a second chance. 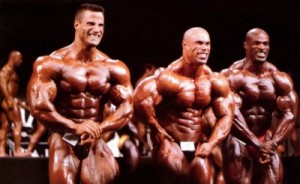 Put it away. Only a handful of men on this entire planet make barely a decent living at bodybuilding. I happened to be one who did for 15 years, but I probably took 20 years off my life. No amount of money in the world is worth that. I’d rather go back in time and get a nine-to-five job and live to a ripe old age, like my grandfather.

There’s no way you can do those things and guarantee safety. It’s impossible. Furthermore, I was on the lighter end of the scale of doing things to myself. I had opportunities to do a lot more to myself chemically, but I didn’t; yet, I still got hurt. I never did insulin, but guys these days are doing insulin like it’s water. Some take a shot with every meal. That’s insane, and it’s the luck of the draw whether it’ll [hurt] you or the next guy.

I took that gamble and lost in every way. Physically, I’m completely limited. Financially, I’m pretty close to ruined. Emotionally, it made a guy like me–whose only fear in life was the loss of my mother and father–afraid of every little ache and pain. I’m afraid I’m not going to be here to enjoy another sunrise, or enjoy another day of laughter with my fiancee, Lacy Porter, or the elation of our wedding in August–all those little things people take for granted. That wears on me.

It has affected my whole life, so to all those guys who are on an eternal quest to have 21″ arms and 20″ calves, and who are so vain about their never-say-die attitude, I say, “Change your attitude.” Worry about keeping that body of yours as healthy as possible, because it’s going to have to last you not just through your next contest or to the end of your bodybuilding contract, but for a long time. And a long time for a human being is nothing. It goes by real quick, even quicker when your health is gone and you have nothing to stand on.

Is there any optimism in your life at the moment?

Yeah, I’m still here. Beyond that, I have to take it day by day. I can’t formulate a plan, because I have to attend to everything that basically caved in on me this past year. It’s been devastating, and I still have many months ahead, in which I’ll have to work through that rubble. I’m 38 years old, but if your health starts waning, time is not on your side.

Is there a glimmer of confidence left?

All my life, my confidence always came from my physicality. I was a boxer, and that gave me confidence. When I became a bodybuilder, just being able to step onstage, go to the gym, battle myself and push myself further than I ever thought possible built lots of confidence. But no matter how strong you are mentally, when you take away that physicality, and you look in the mirror and feel the way I do right now, it just zaps you. It’s taking awhile, but it’s coming back. 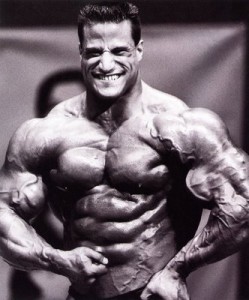 Mike Matarazzo’s second chance: wisdom for those who have a first chance. That physicality was an effect, not a cause. A deeper strength enabled you to build that physicality in the first place.

I’ve said the same thing to myself: where did I get that push to get myself to do a certain thing or look a certain way? It had to come from within, and it’s still there. Many times, when I was in the hospital, that little voice in the back of my head said, “Get your act together. Get the hell out of here.”

You have tons of fan support out there.

I want to say this from the bottom of my heart: I can’t thank the people out there enough for their cards, letters and get-well messages, and especially the people who have been trying to help me out financially. It’s been incredible. It’s really touching that people who don’t have a lot of money are scraping together whatever they can to send to me. I’ve received letters from people in the armed services, who don’t make a lot of money, but they send $20, $12. It’s just great, it really is.

And it’s really nice when they tell me they’ve been following me in FLEX since 1991. They say, “You’re more to us than just a good bodybuilder.” What an honor that people are remembering me. It has brought me to tears many times. I can say I truly feel honest love and affection for all of those who have kept me in their thoughts and prayers, and I hope they will continue to do so. It’s an incredible lift for me. I just want to say a huge, huge thank you to everybody.

Bodybuilding & Fitness Sport in the Philippines