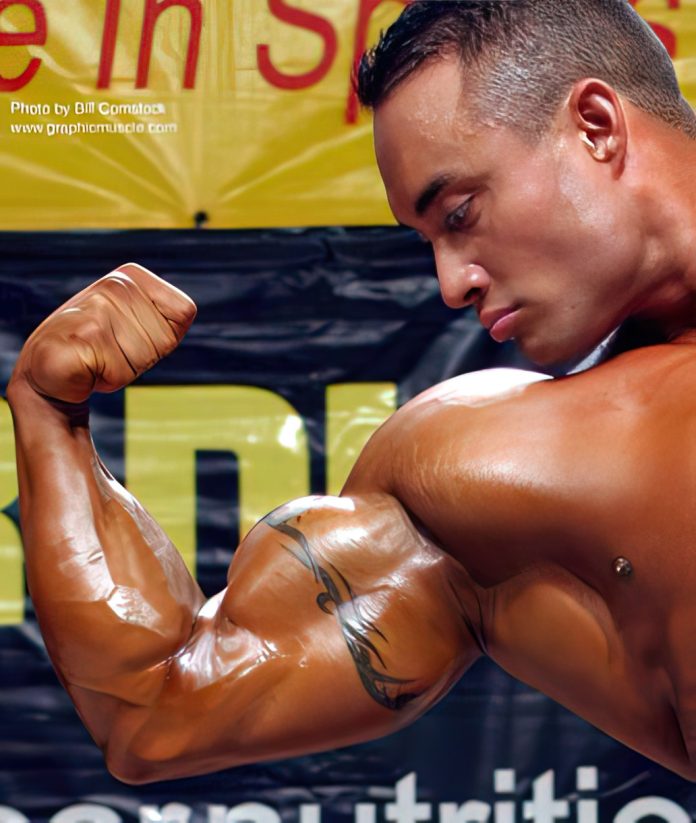 Originally from Hilo, Hawaii, 27-year-old Myles Kuikahi now resides in Modesto, California after a 5 year stint in the US Air Force. An ethnic blend of Filipino/Hawaiian/Chinese and Caucasian, Myles is blessed with exceptional genetics and a chance to take his bodybuilding career to the next level. Myles works as a Bail Agent and Personal Trainer.

What is your height & weight?

What are your parents’ names and where are they from?

Do you have any brothers or sisters?

How did you get started in bodybuilding?

My Uncle was a pretty well-known powerlifter on our island and he started training me for high school sports. The results came quickly and I was really turned on by the way my body was changing, so I wanted to take it a step further. Bodybuilding became a way of life for me. I started buying FLEX & Ironman magazines and was blown away by what I saw. Right then, I knew that this was going to be my way of life!

What are your goals in bodybuilding?

Right now, just putting on more quality sizes. I started competing in 2001 as a Middleweight at 176lbs. By the next year, I moved into the Light Heavyweights and have stayed there since. I weighed 191lbs. at my last show (the NPC Excalibur). I’ve spoken with the judges and they’ve told me that in order for me to make an impact, I need to put on more size and move into the Heavyweights in the 200-pound range. I’m taking most of 2004 off and will do another regional show before stepping onto a national level stage in 2005.

Currently, I’ve been spending a lot of time in Los Angeles shooting with different photographers for magazines. Besides intense training for next year, I am concentrating on getting my website live and getting as much exposure within the industry as I can.

Long term, I want to be a top NPC competitor on the national level within the next 2 years. But in order to do this, I need to get bigger, put on more quality muscle, and then, move into the Heavyweights. It’s my dream to go compete in the USA championships as a favorite in the Heavyweight class and win my pro card.

Where do you see yourself 10 years from now?

As far as bodybuilding, I’d like to make my mark in it, still, be actively involved in the sport, and still make a living from it. On the personal side, I’d like to see myself happily married with a few more kids and still plugging away pursuing other interesting projects. Overall, I’d like to just be enjoying life.

Do you play any other sports?

Not competitively anymore. I am currently taking Escrima lessons and love it. In junior high and high school, I played football, baseball, and basketball. I also surfed and was involved in Tae Kwon Do and Muy Thai Boxing.

What was your first bodybuilding competition and when?

In 1994, I competed in the NPC Big Island Classic which was held on my island of Hawaii. I placed 4th out of 5 people which I was very pleased with considering I had no clue as to what I was doing! I didn’t diet until the week before the show and my diet consisted of chicken (any kind: adobo, fried, etc.) with the skin still ON! This show was actually the first I had ever even been to and I was competing in it. I loved it but didn’t compete again until 6 years later.

My fiancée Rochelle and our baby daughter Selena. They are my biggest motivators and inspiration in EVERY aspect of my life. I always want to be my best for them.

What’s your philosophy on training?

I like to go hard and heavy on all basic compound lifts (bench, squats, deadlifts, barbell rows). The best advice I could possibly give to someone just starting out who wants to take weight training seriously is this: Listen to your body closely and make sure you pay attention to training, cardio & nutrition.

Where do you train?

What do you do for supplementation?

I always use whey protein every day and I cycle my creatine and glutamine one month at a time. I also really like Hydroxycut (Muscletech) for leaning up if I have a photo shoot or appearance. I make sure to drink plenty of water all the time. I honestly take in about 2 gallons of water a day just to keep my body hydrated and to flush out all of the impurities.

What do you think about the drug situation in bodybuilding?

The sport of bodybuilding involves going to extremes to be the best. These extremes MAY include training (weights), cardio, dieting, steroids, and other performance-enhancing supplements. I personally don’t like or agree with some of the abuse, but I know what I need to do and that’s all that I think about.

My diet is constant year-round. I personally don’t buy into the typical bodybuilding mentality that you should put on as much weight as you can in the off-season. Those bodybuilders use that philosophy as an excuse to eat whatever they want and they always end up looking fat and bloated. All that extra weight is just going to be a problem to lose come contest time.

I am always mindful of what I eat. Chicken, steaks, turkey, eggs, rice, vegetables, oatmeal, lots of water, and protein shakes are constant mainstays in my diet. Generally, I try to avoid dairy products (ie: milk, cheese, butter) because it makes me retain water and I also stay away from most starchy carbs (ie: pasta, potatoes, bread), with the exception of rice. I always cut out my carbs after 4:00 pm every day. I also allow myself one cheat day a week and it’s usually Sunday. My family enjoys going out to eat and I’ll usually splurge by having more carbs and a dessert, but generally, I still eat clean.

Did anyone inspire you to become a bodybuilder?

When I was 16, I opened a September 1991 issue of Ironman magazine and it had a picture of Mike Matarazzo doing a double biceps pose. It was the freakiest thing that I’d ever seen, I couldn’t believe my eyes! Mike became my bodybuilding idol and inspiration when I first started out. The funny thing about it is, years later, Mike trains at the same Gold’s that I do and we’ve even become friends. He’s a true champion and a great ambassador of the sport.

Who is your favorite bodybuilder?

There are so many. But I’d have to say, Quincy Taylor. Quincy is 6’4” and over 300 pounds in the off-season. After a quiet 2003 season, a lot of people have cast him aside because he hasn’t gotten a lot of publicity lately, but I know Quincy personally and he is going to surprise the hell out of a lot of people in 2004! I believe that he will be Mr. Olympia someday. He’s a genetic freak but still has the aesthetics and pretty lines that exemplify what bodybuilding is all about.

Troy Alves is also another favorite. You know that saying, “Always a bridesmaid, never a bride…”? That was Troy for so many years. He always got edged out of that pro card, but kept at it and never stopped believing until he got it. And then he had an outstanding rookie year AND placed in the top 10 in his first Olympia! He’s accomplished a lot in his short time as a professional and he gives the “little guys” like myself hope to achieve greatness.

What don’t you like about the sport and how would you change it?

I love this sport. If I didn’t, I wouldn’t associate myself with it. True, there are a lot of people, situations, and events that may be strange, but that just adds to the uniqueness of the sport. I don’t have any complaints.

What are your best & worst qualities as a person?

I am straightforward and honest. You will ALWAYS know where you stand with me. Good or bad, there will never be any second guessing. I’m very mindful and respectful towards others. I’m a simple, mellow guy who enjoys life and loves his family. Worst quality? I am late, almost always! But I am honestly trying to work on that!

What is the most important thing in your life?

God and my family are the most important in my life. My whole world revolves around these important factors.

What is the lowest point of your life?

My first 2 years away from home in the Air Force. It was the first time I had ever been away from my family and I was really homesick and kind of lost track of the direction of my life and got lazy and fat. I fell into a deep depression.

Any messages to young bodybuilders?

Be consistent, don’t miss a workout! Don’t listen to too many people. Trust yourself, listen, and be in tune with your body. Be proud of the gains that you make and don’t try to compare yourself and compete with others.

Yes, my 2 girls! My beautiful fiancée, Rochelle, for being the fire that burns inside to make me always want to be my best. And, my precious baby daughter Selena continually reminds me that I am her hero & for giving me another reason to pursue the sport I am passionate about.

My family back in Hawaii and my family here on the mainland for believing in my dreams and always being supportive.

How to SQUAT Heavy ALONE (100% Safely): Power Rack vs Platform