Angelie Sabanal left the ONE Championship ring earlier tonight in disappointment, as she dropped a first-round submission to promotional newcomer Itsuki Hirata on the preliminary card of ONE: LEGENDARY QUEST, which took place Saturday, 15 June from the Baoshan Arena in Shanghai, China.

Although she was very game, Sabanal couldn’t get herself over the hump, now losing her second straight contest since making her professional mixed martial arts debut last year.

“Coming into the match, I could feel the nerves coming over me because it was time to go,” Sabanal said.

“The majority of my previous bouts were against strikers, although I do have experience with grapplers as well. We knew about Itsuki [Hirata’s] game and we did our best to prepare for her style. But sadly, we fell short. I did everything I could, but Hirata is really good at what she does and she was able to get the submission.”

The bout started with both athletes meeting at the center of the ring, trying to measure each other out. Sabanal unleashed a few leg kicks to soften up the base of the Japanese warrioress, but Hirata was able to respond with a few leg kicks and a couple of punches of her own.

Halfway past the opening bell, Hirata was able to take down the Filipina martial artist and slide into side control, where she softened up “D’Explorer” with a couple of punches to the head. Not long after, Hirata swiftly transitioned to an Americana, forcing Sabanal to tap. 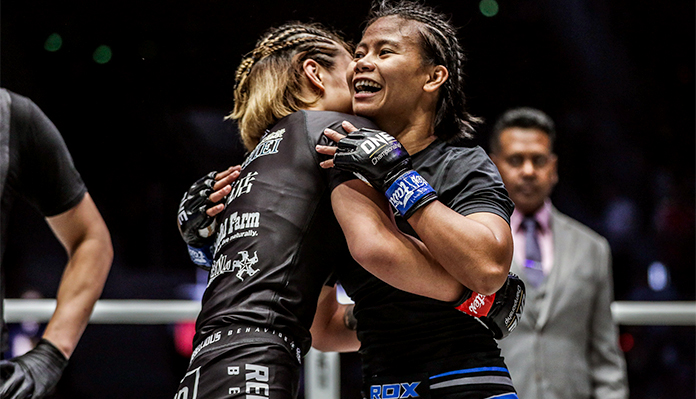 Sabanal found success in her ONE Championship debut in 2018, where she scored a shocking unanimous decision victory over fan-favorite Rika “Tiny Doll” Ishige. However, she dropped a decision loss to Indonesia’s Priscilla Hertati Lumban Gaol in her following bout.

The loss to Hirata, Sabanal said, will serve as a big lesson for her moving forward.

“Right now we’re headed back to the drawing board. We have to work more on my areas of improvement, especially in Brazilian Jiu-Jitsu, submission grappling, and wrestling. These skills will be essential to my career moving forward,” Sabanal concluded.

“Hopefully, my team and I will be able to fix the holes in my game and I can show the improvements in my next bout.”

The loss bumps Sabanal’s overall record down to 1-2. Although she has now dropped two straight, Sabanal has no regrets and vows to return a better athlete.

Despite the Weather, Trikini a Success!

Jonathan Haggerty to defend title against Rodtang Jitmuangnon in Manila