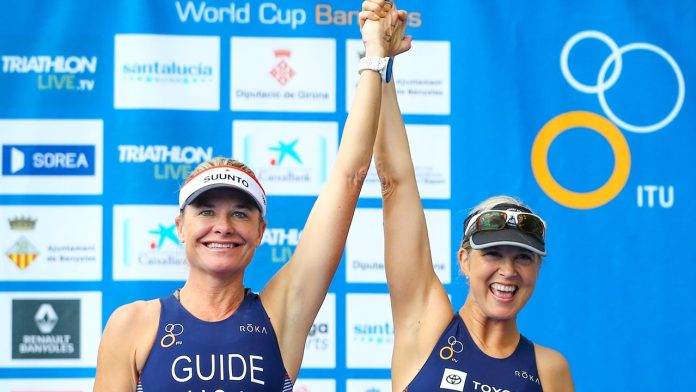 As one of the world’s top para triathlete, Amy Dixon is always looking forward. Even though an autoimmune disorder has taken away most of her ability to see, she has an extraordinary vision for reaching her goals.

This summer, she competes in Tokyo. For Dixon, it’s an incredible journey that would have seemed unimaginable two decades earlier.

Dixon first noticed her vision problems as a 22-year-old college student. She struggled to see clearly in a darkened room. Driving at night, she failed to notice oncoming cars. The signs were clear that something was wrong with her eye health, but she wasn’t convinced.

“I had 20/20 vision as a kid, so I dismissed the problems I was having as being related to some other condition like migraine,” said Dixon, a migraine sufferer since she was a teen. “I was ignoring what was obvious – that something was wrong with my eyes.”

After scheduling an appointment with an ophthalmologist, Dixon learned she had uveitis, a form of inflammation inside the eye. Her doctor told her that the disease had already put her eyesight in serious jeopardy. He said that 70% of her peripheral vision had been lost and she would need to begin treatment immediately or risk going blind within 10 years.

“Unfortunately, I waited too long before having my eyes examined and uveitis had already attacked my vision. When the diagnosis sunk in, I thought I was destined to go blind,” Dixon said.

Becoming her own advocate

Rallying behind a forward-looking attitude that would become her calling card, para triathlete Dixon confronted her condition head-on. Working with her doctor, she began an aggressive treatment regimen. While uveitis would eventually take 98% of her vision, the treatments succeeded in slowing down the progression of the disease.

A new diagnosis and the athlete reemerges

With her uveitis in remission, para triathlete Dixon received a second vision diagnosis: She now had developed glaucoma as a result of her treatment. Resilient and determined to keep her life moving forward, Dixon began treating her glaucoma.

Along the way, she re-engaged in sports and took up swimming, a favorite activity for the former competitive high school swimmer. When a friend introduced her to triathlons (swimming, running, and biking), she was hooked. She completed her first triathlon in 2013 and today, she is the reigning ITU Aquathlon World Champion and a seven-time ITU Triathlon Gold Medalist. When the competition in Tokyo starts in August, Dixon will race toward the finish line the same way she approaches life: by overcoming the setbacks in her path. It’s an important lesson she is eager to share.

“There is always a way forward,” said Dixon. “I encourage people to maximize the strengths they have and find creative ways to do the things they want. It may not be the way you wish for, but if you are open to learning, you can do great things.”

A prescription for better eye health

Dixon views her journey as a cautionary tale and she encourages everyone to be proactive in taking care of their eyes.

“Uveitis progressed quickly in impacting my vision because I waited too long to see a doctor and wasn’t diligent about getting my eyes examined annually,” para triathlete Dixon said. “Pay attention to your eyes. If you suspect you have a vision problem, then see an eye doctor right away.”

As she continues to manage her glaucoma, she also urges people, particularly young adults, to be wary of a disease that can sneak up without symptoms and is the leading cause of irreversible blindness.

“A dilated eye exam could save your sight,” Dixon said. “The power is in your hands, so be your own advocate for achieving better eye health.”

If you’ve been diagnosed with glaucoma or are caring for someone with glaucoma, a resource is “Understanding and Living with Glaucoma.” This free booklet is published by the Glaucoma Research Foundation, with support from Aerie Pharmaceuticals. It can be downloaded or ordered (in English and Spanish) at www.glaucoma.org/booklet.

EDDIE TORRES The Strongest Man in the Philippines